CANADA AND MEXICO WON'T BE WALKING AWAY FROM NAFTA TABLE, TRUDEAU PROMISES

Prime Minister Justin Trudeau concludes his first official visit to Mexico today with a speech to the country’s senate.

Trudeau is expected to highlight the existing strengths of the Mexico-Canada relationship.

That bond was on display Thursday as the leaders of the two countries said they’re not giving up on talks to rewrite the North American Free Trade Agreement.

“Canada and Mexico are committed to working together as we tackle some of the most pressing challenges facing our world, namely those brought by climate change,” Trudeau explained, “We stand firm in our commitment to fully implement the Paris agreement and to keep the global momentum going.” 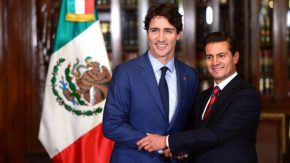 The resolve by both Justin Trudeau and Mexican President Enrique Pena Nieto to remain at the table is being tested by aggressive U.S. proposals, the most recent a suggestion any new deal expire after five years.

Content rules for cars could be tabled as early as today as talks continue in Alexandria, Virginia.

But Trudeau says U.S. proposals are just that, ideas, and Canada’s representatives are not walking away from talks.