The Sistine Chapel just may be coming to a theatre near you.

That’s because The Vatican Museums have collaborated with British pop music star Sting as well as the producers of Olympic ceremonies – to craft a live, surroundsound show – which tells the tale of Michelangelo and his masterpiece of frescoes in Rome. 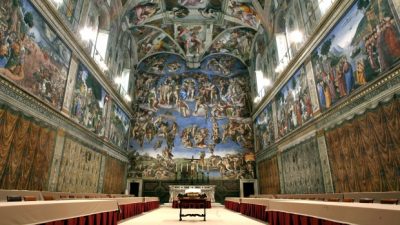 The epic $10.6 million production – Universal Judgment; Michelangelo and the Secrets of the Sistine Chapel – debuts March 15th at an auditorium near the Vatican.

Creator Marco Balich – who’s been the artistic director for several past Olympics – says he’s already entertaining requests to take the hour-long spectacle and its soundtrack by Sting abroad.

The Vatican will receive “contained” royalties from the production.

Museums director Barbara Jatta says the show provides an unparalleled educational opportunity to bring art, culture and faith to younger audiences – and she stresses the Vatican’s history of using “tradition and innovation” to communicate.