Songstress Sarah McLachlan added her name to the Canadian Music Hall of Fame over the weekend at the National Music Centre in Calgary. 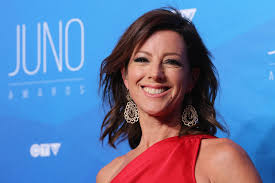 McLachlan joins the 49 other inductees who include Buffy Sainte-Marie, Randy Bachman and The Tragically Hip.

The 49-year old singer/songnwriter is one of Canada’s most celebrated musicians, having won 10 Junos and three Grammys.   She has also received a Governor General’s Performing Arts award and is an Officer of the Order of Canada.