TTC CEO Andy Byford calls it “the biggest change to King Street in a generation.”

The King Street Pilot Project starts in November, and Byford says he’s confident the changes will improve the TTC’s busiest surface route and may actually increase the number of people taking transit on King Street.

TTC commissioners have approved a set of guidelines by which they will monitor the success of the pilot. 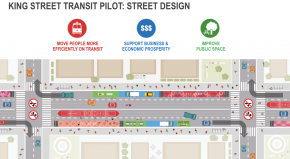 As part of the plan, a number of rules will discourage motorists from traveling along King Street between Bathurst and Jarvis, clearing the path for streetcars.

The streetcars running along King will get a dedicated lane each way in this stretch, while other vehicles will only be allowed to access the street one block at a time before being forced to turn right.

The TTC will release monthly updates on commute times, street car reliability and ridership once the pilot begins. City transportation staff will analyze the effects the pilot is having on motorists, cyclists and pedestrians.