The separated bike lanes on Bloor Street West are another step closer to becoming permanent. 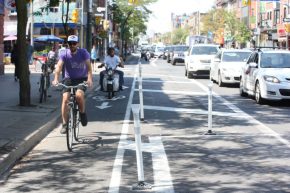 Members of Toronto’s Public Works Committee have voted 4-2 to keep them going between Shaw Street and Avenue Road, following the release of a staff report which cites their success in a pilot project that began in August 2016.

Ward 7 York West Councillor Giorgio Mammoliti voted against the motion, saying more research on the bike lanes should be completed before they can be approved.

“At times over the course of today, it has felt like we were in the 1950’s. For goodness sakes, this morning a cyclist was killed on our streets,” Cressy lamented.

A 39 year old man died Wednesday morning, after he was hit while riding his bike yesterday morning on King Street.

According to the staff report, the number of cyclists who used the separated bike lanes on Bloor Street West during the pilot increased by nearly 50 percent. As well, it says the area was only affected slightly as vehicular traffic slowed down by an average of two to four minutes and other motorists were choosing other parallel streets to travel to their destinations.