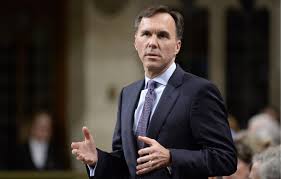 The finance minister, under fire over his failure to place his assets in to a blind trust, has said he’ll use the fall economic update to document the recent strong growth in Canada’s economy and where it’s headed next.  The Finance Department says G-D-P growth reached a 4.5 per cent pace in the second quarter.

Over the past two years the Trudeau Liberal Government has enhanced child benefits, lowered income tax rates for some, and spent billions on on much-needed infrastructure projects, but has run multi-billion dollar deficits to pay for it all.

Morneau isn’t saying whether he’ll unveil a plan to balance the government’s books as demanded by Conservative opposition finance critic Pierre Poilievre.  He says Morneau must rein in out of control government spending, get back to a balanced budget, and provide serious tax relief for small businesses and working class Canadians.