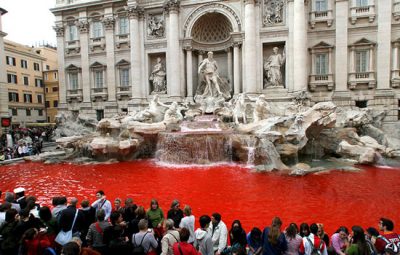 Graziano Cecchini insisted that the dye wouldn’t harm the beloved monument – and it was intended as a protest against Rome’s corruption and filth – and “a cry that Rome isn’t dead, that it’s alive and ready to return to be the capital of art, life and Renaissance.”

Cecchini was also responsible for sending thousands of colored plastic balls down Rome’s Spanish Steps in 2008.

During the first red Trevi stunt in 2010 – a rightwing group claimed responsibility and said it was to protest the cost of organizing the Rome Film Festival – and the dye referred to the festival’s red carpet.

The 2017 edition of the festival opened today.