Mississauga Mayor Bonnie Crombie has announced she’s running for re-election next year October, and she made the announcement on Friday morning with Zoomer Radio’s Happy Gang!

Crombie says she still has a lot to do as Mississauga’s mayor. 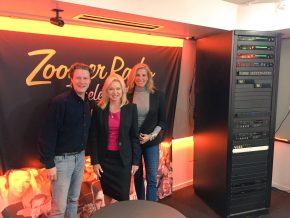 “I have a great council. We work so productively well together. We’re building out a complete city, a livable walkable city. I know that Mississauga had been known as kind of a sleepy suburb once upon a time but today, we are a leading edge, dynamic, diverse, young bright city. There’s so much going for us. There’s a real buzz about our city. Investment is just pouring in, down from the Lakeshore, all the way along Hurontario and our downtown,” Crombie explained.

Mayor Crombie succeeded the highly popular long running mayor Hazel McCallion who announced her retirement from the job before the last mayoral election in 2014.

Toronto Mayor John Tory has said for sometime he plans to run for a second term in next fall’s municipal election. Mayor Tory will have some competition in former city councillor and failed mayoral candidate Doug Ford, who’s also announced he’s running again.