BRITAIN TO GIVE EREBUS AND TERROR TO CANADA

Britain is going to gift Canada the two shipwrecks from Sir John Franklin’s doomed expedition to find the North West Passage in the 1840’s. 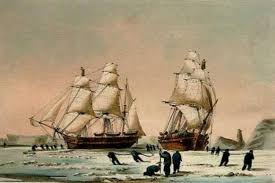 The British Defense Ministry says ownership of HMS Erebus and HMS Terror are to be formally transferred to Parks Canada with Britain retaining “a small sample of artifacts” recovered from the vessels, for display in museums.
Britain’s defense secretary says the arrangement will recognize the historical significance of the Franklin expedition to the people of Canada and will ensure that these wrecks and artifacts are conserved for future generations.

Erebus and Terror, with 129 men aboard, left Britain in May of 1845 under Franklin’s command.  They disappeared trying to plot an Arctic link between the Atlantic and Pacific.  None survived. Their disappearance marked the worst tragedy in the history of Arctic exploration.

Erebus was located in Victoria Strait in 2014.  Terror was found well-preserved two years later in a bay off nearby King William Island.

The two shipwrecks have been designated Canadian historic sites. Parks Canada plans a major excavation of the Erebus next summer.

In the 1980’s researchers said the remains of expedition members found on Beechey Island indicated they had died of cold, hunger and lead poisoning from canned food.