President Donald Trump’s former campaign chair Paul Manafort and Manafort’s business associate, Rick Gates, are looking at decades in federal prison and millions in potential fines if convicted on all counts in a federal indictment. 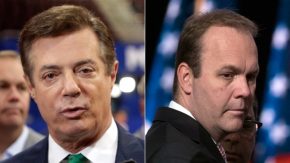 Manafort potentially faces up to 80 years in prison, while Gates, who also worked for the Trump campaign, faces up to 70.

Special Counsel Robert Mueller’s investigation into Russian interference in the 2016 U.S. election alleges the two worked as unregistered agents of the government of Ukraine and the Party of Regions; a pro-Russian political party led by Victor Yanukovych, who has close ties to Russian President Vladimir Putin.

The indictment says up to $75-million flowed through overseas accounts controlled by Manafort and Gates.

Former Trump campaign aide George Papadopoulos pleaded guilty earlier this month to lying to F-B-I agents about the timing and detail of his attempts to line up meetings between Russian government officials and the Trump campaign.