“Depraved Coward” and “cowardly act” are two terms being used to describe yesterday’s deadly truck attack along a popular bike path near the World Trade Center in Manhattan. 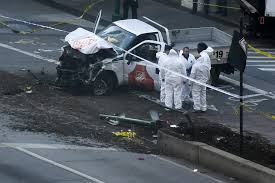 New York Governor Andrew Cuomo stressed this morning that the the investigation is ongoing but that investigators have found a note that references “The Islamic State.”

The driver is in critical condition after police shot him in the abdomen.

Cuomo calls the driver a “depraved coward,” and says the attack “did not instill terror” among hardy New Yorkers.

Eight people were killed in yesterday’s attack.  The suspect is a 29-year old Uzbek who came to the U-S legally in 2010.

Prime Minister Trudeau has offered Canada’s condolences to the victims and their families, saying he is “deeply grieved” by the tragedy.