Prime Minister Justin Trudeau is calling yesterday’s mass shooting at a church in south Texas a “senseless and horrific act of violence.”

The Prime Minister has issued a statement saying “it is appalling that the attack happened at a place of worship, where people should have felt safe.”

Trudeau says “Canada stands in solidarity with the United States during this difficult time.” 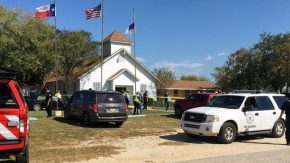 Texas Governor Greg Abbott says 26 people were killed and about 20 others injured after a lone gunman clad in black tactical gear opened fire at First Baptist Church in Sutherland Springs, Texas. The victims ranged in age from 5 to 72.

U-S President Donald Trump says the mass shooting in a south Texas church is not a “guns situation” but the result of a “mental health problem at the highest level.”

Speaking alongside Japan’s prime minister in Tokyo Monday, Trump described the gunman in yesterday’s massacre as a  “very deranged individual.”

The shooter has been identified as 26 year old Devin Kelley.  A U.S. Air Force spokesperson says Kelley received a bad-conduct discharge from the Air Force in 2014 for allegedly assaulting his spouse and child, and was sentenced to 12 months’ confinement after a 2012 court-martial.

A motive for the shooting has not been revealed.

It is the deadliest in the state’s history.