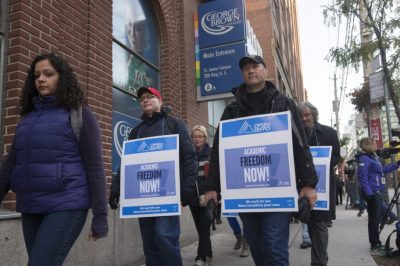 A surprise development in the on-going Ontario college strike.
Talks to end the four-week old labour disruption at the province’s 24 colleges broke down today – when the management team walked away from the table.
That was followed by the college bargaining team calling for a forced vote by striking faculty members.

The College Employer Council has also asked Ontario’s Labour Relations Board to schedule the vote – and it’s calling for the Ontario Public Sector Employees Union –  which represents the 12-thousand workers – to suspend the strike in the meantime.

Negotiations had resumed last week at the urging of Advanced Education Minister Deb Matthews – who asked both sides to get a deal done – following three weeks away from the table.