Just how much exercise do Zoomer women need to stave off risks such as heart disease, cancer and diabetes? 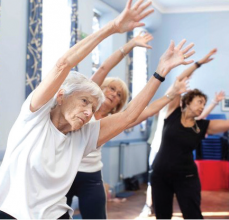 The researchers recorded activity levels using a newer and more sensitive meter which the women wore all day except when they were sleeping or engaged in water-based activities.

No relationship with premature mortality was found in the low physical activity and sedentary activity groups.

You can read about the research in Circulation.