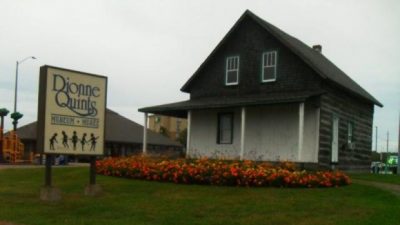 A lengthy campaign to keep the birth home of the Dionne quintuplets in a northeastern Ontario city – will celebrate its success this weekend – as the house-turned-museum is uprooted and moved to  another location in the community.

It’s the second move for the historic log cabin.

It’s fate was uncertain since it closed to the public two years ago – but it’s set to be hauled from its current spot by the highway in North Bay, Ontario – to a waterfront park in the city on Sunday.

The two surviving quintuplets, Cecile and Annette Dionne, say they  are proud and grateful that a key monument of their childhood – and of Canadian history – is being preserved.

The 83-year-old sisters live in Montreal – and say they are thankful to those in the grassroots movement  who rallied to save the home and its legacy.

A proposal to have the log cabin moved to a nearby community – and hand related artifacts over to museums or universities – sparked public outcry last fall.

City officials decided to sell the land the home is on – and use the estimated $150,000 proceeds – to move the building roughly two kilometres downtown.