After going public with their relationship here in Toronto this past summer during the Invictus Games, Prince Harry is engaged to be married to former Suits star Meghan Markle. 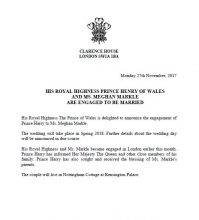 Clarence House released a statement this morning stating that Prince Harry had informed the Queen as well as other close family members, and that the wedding would take place in Spring of next year and that further details about the wedding will be announced in due course. The statement adds that the couple will live in Nottingham Cottage at Kensington Palace.

In a statement released by Kensington Palace, the Queen and the Duke of Edinburgh said they “are delighted for the couple and wish them every happiness.”

Prince William, Harry’s brother,  and Kate Middleton have also shared their excitement about the news on Twitter. 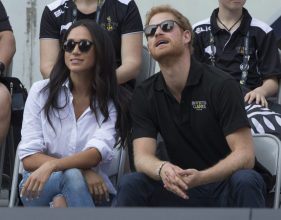 33 year old Prince Harry has been dating 36 year old Markle for at least 15 months. This is his first marriage, and her second. Prince Harry is fifth in line to the throne, but will become sixth after Prince William and Kate Middleton welcome their third baby in the spring.

The couple will make a public appearance on Monday at Kensington Palace.