PEREGRINE FALCON NO LONGER A THREATENED SPECIES IN CANADA

The peregrine falcon may soon come off the list of threatened species in Canada.

Members of the Committee on the Status of Endangered Wildlife are recommending the federal government delist the bird as a threatened species in most of the country. 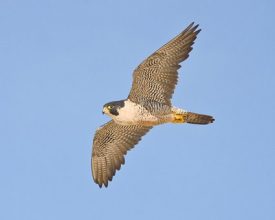 The fast-flying peregrine was added to the list in 1978 when there was only one active nest east of the Rockies and south of the 60th parallel.

But the bird’s numbers have increased to 600 in southern Canada and 1500 in the north.