KING STREET PILOT PROJECT A HIT WITH MOST TORONTONIANS, 1 IN 4 OPPOSED

The King Street Pilot Project is going over well with most Torontonians. 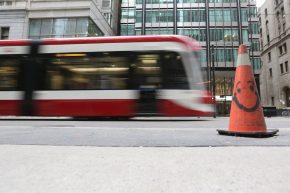 According to a new Forum Research poll, 73 percent of Toronto residents say they are familiar with the project which has given priority to streetcar traffic on King Street between Bathurst and Jarvis Streets by forcing drivers to turn right at most major intersections.

Fifty percent of the respondents say they approve of the project at least somewhat, with a third saying they strongly approve of it. And the portion of Torontonians who favour the King Street Pilot is double the roughly one quarter of respondents who either somewhat or strongly disapprove of the idea. Fifteen percent say they are strongly opposed.

Another 20 percent say they had no strong feelings either way, and 10 percent didn’t know about the King Street Pilot.

The 1.5 million dollar project began November 12th, and a recent analysis shows travel time for streetcar riders has dropped 24 percent during the afternoon rush period of 4 to 7pm.