Meryl Streep says the allegations against movie producer Harvey Weinstein represent “the most gargantuan example of disrespect” in any industry. And she says women are fighting back against it.

The multi Academy Award winning actress says she and other actresses plan to make a series of what she calls “non-negotiable” demands in response to the growing scandal. 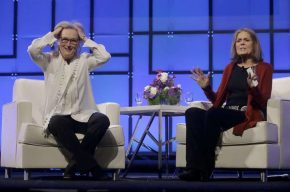 68 year old Streep made the comments in a conversation with feminist icon Gloria Steinem yesterday at the two-day Massachusetts Women’s Conference in Boston.

During the first day of the conference, Steinem called U-S President Donald Trump the “harasser in chief.”

More than a dozen women have said Trump sexually assaulted or harassed them over the years. He has repeatedly denied the allegations.