In Ottawa, provincial and territorial finance ministers are planning on Monday to demand a bigger share of tax revenues from legalized marijuana when they meet today with their federal counterpart in the nation’s capital.

They will be asking what entitles the Trudeau Liberals to half of the estimated one-billion-dollars in taxes that will start flowing when marijuana is legalized on July 1st of next year.

Ontario’s Charles Sousa says the provinces need to be compensated because they’re bearing more of the costs.

“We all agree that the price point of 50-50 is not acceptable. We all agree that the majority of the costs that (are) being incurred is on the provinces, and we’ve yet to determine what the federal government is going to pay for, so we need evidence from the federal government as to what it is that they intend to do and what they intend to pay for so we can then come to an agreement as to what that sharing formula should be,” Sousa explained. 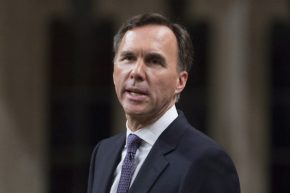 As for Federal Finance Minister Bill Morneau, he reiterated last night he “can be flexible,” but refused to say how much he’s willing to give up to the provinces.