OVERCROWDING IN ONTARIO HOSPITALS ON BRINK OF CRISIS: OHA REPORT

Overcrowding at Ontario hospitals has become so serious, that it’s umbrella organization says the sector is “on the brink of a crisis.”

Representatives with the Ontario Hospital Association plan to go to Queen’s Park tomorrow to plead their case for more funding.

According to their prebudget submission, they are looking for a 4.55 percent increase in operating funding for 2018-19.

This amounts to an extra $815-million and would bring the sector’s total operating allocation for the next fiscal year to just under $19-billion. 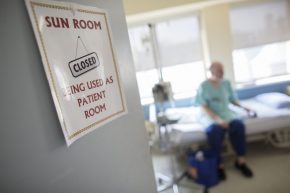 An OHA report says patient occupancy at about half of the province’s 143 hospital corporations exceeded 100 percent this past summer. And occupancy at some hospitals was as high as 140 percent while the international standard for safe occupancy is 85 percent.

It also says far too many hospital beds are occupied by patients who don’t need to be there.