Hillary Clinton says she’s “a tiny bit less concerned” about the future of the United States following a surprise result in Alabama’s senate race this week. 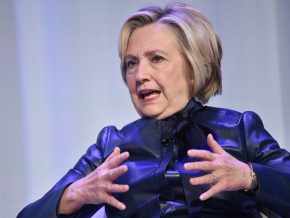 Clinton made the comments to a crowd of more than 5000 people in Vancouver Wednesday, saying the victory by Democrat Doug Jones on Tuesday marked a turning point for Americans who are opposed to U.S. President Donald Trump.

“In Alabama, we saw the difference that activism and engagement can make. There is just too much at stake for any of us to sit on the sidelines or stop speaking out about the issues that really make a difference in peoples’ lives,” Clinton said to applause.

Clinton was in Vancouver to promote her new memoir, What Happened, which follows her time running for the 2016 run for the U.S. presidency and the aftermath of her loss.

The former U.S. secretary of state told the crowd she plans to continue fighting for what is right.