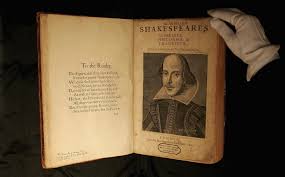 The copy of the 1623 First Folio, the first printed collection of Shakespeare’s plays, is on exhibit at the Old Chapel Museum in Stonyhurst College in Lancashire.

The copy of the folio was bequeathed by another former pupil, Lord Arundel.

The folio was compiled seven years after Shakespeare’s death by his fellow actors and friends and is the only source of 18 of the Bard’s plays, including Macbeth.  It’s also credited with being the reason Shakespeare’s literary legacy has survived.