A celebration of life for hockey legend Johnny Bower will be hosted by the Toronto Maple Leafs on Wednesday January 3rd. 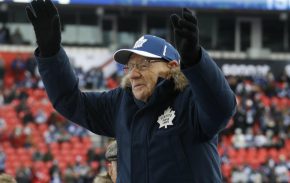 The public event will take place at the Air Canada Centre and will include past and present Maple Leaf players and guests from the NHL.

Bower was a Hall of Fame goaltender who remained a beloved face of the Maple Leafs long after his retirement from the NHL. He died of pneumonia on Tuesday at the age of 93.

A private funeral for Bower has also been planned and will be held in Oakville.

Johnny Bower spent 11 seasons with the Maple Leafs and led them to four Stanley Cup titles, including their last one in 1967.