The opposition Conservatives in Ottawa are not buying a decision that there was no ethics breach by Finance Minister Bill Morneau, who’s been cleared of any wrongdoing by the ethics commissioner. 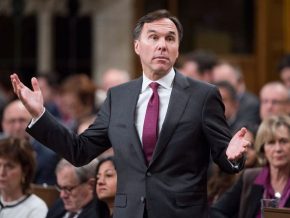 Mary Dawson has absolved Morneau and his father, saying they did not do anything to gain from inside knowledge that could have been beneficial to their family company, Morneau Shepell.

But Conservative finance critic Pierre Poilievre continues to say that Morneau was wrong to sell his shares shortly before introducing the tax hike on the wealthiest Canadians.

He says Conservatives believe it is unwise for ministers to buy or sell shares in the weeks immediately before the introduction of tax measures and that finance ministers should lead by example.

Political opponents asked the ethics commissioner to look into several sales of millions of dollars worth of shares in Morneau Shepell in late 2015 by Morneau and his father.

A spokesperson for Morneau says his office is “pleased with the outcome” of the commissioner’s latest examination.