The King Street Pilot project appears to be popular among TTC riders. 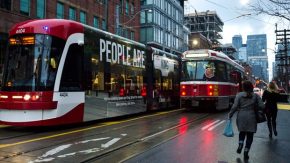 Morning rush ridership on King Street between Bathurst and Jarvis Streets has increased by almost 25 percent since the pilot began in November.

The number was released Thursday in a TTC report which will go to TTC board members next week. TTC chair Josh Colle says this is an extraordinary number and shows that when transit actually becomes rapid, people want to use it.

The King Street pilot project prioritizes street car service and forces all vehicular traffic to turn right at every major intersection. There is also no longer street parking on King between Jarvis and Bathurst which has resulted in a substantial loss in business for restaurants in the entertainment district.

“We’re looking at all the things we can try to do to maintain the integrity of trying to move the transit vehicles faster, which was always the purpose, but at the same time, make sure we can help the businesses and the street to do well, so we’re looking forward to the meeting on Friday. We’ll discuss whatever the group wants to discuss,” Tory explained.

The restaurant owners are suggesting that the rules around the King Street Pilot are lifted after 7pm on weekdays as well as on weekends.