Federal Green Party Leader Elizabeth May says she’s asked for an independent probe into allegations that she harassed and verbally abused former staff. May says it’s a bid to prove that she’s done nothing wrong. 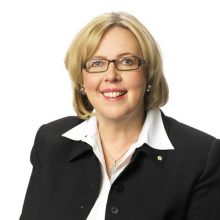 “This caricature of sort of a sort of toxic bully predator of people is so far removed from how I am in life to people that it just needs to be dealt with by someone other than me,” May explained Monday in Ottawa, “I’m not in a good position to tell a lot of people, gee I’m really nice.”

The investigation will be led by Toronto lawyer Sheila Block who’s been hired by the Green Party, after three former staff members told the Toronto Star and the Hill Times that May has been a bully.

The three allege that at various times May yelled at them, wrote disparaging comments about them in emails, cursed at them in conference calls or belittled them in front of others.

May says while she is absolutely not a bully, she has bad days and when she has lost her temper, has apologized right away.

The investigation is expected to take between two and four weeks. The findings will be made public.