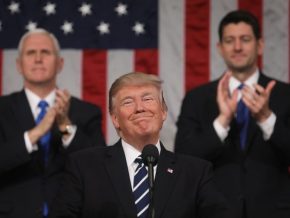 Addressing a deeply divided Congress and nation, Trump also appealed for unity in challenging lawmakers to tackle immigration policies as he redoubled his recent pledge to offer a path to citizenship for 1.8-million young immigrants.

The U.S. President did not directly address the re-negotiation of NAFTA in his first State of the Union address.

But he did say he has ended unfair foreign trade, pointing out the U.S. expects trading relationships to be fair and reciprocal from now on, and promised to work to fix bad trade deals and negotiate new ones.

Trump has threatened in the past to scrap the North American Free Trade Agreement, but Prime Minister Justin Trudeau says he is doubtful that will actually happen.

“I don’t think that the president is going to be cancelling it,” Trudeau explained Tuesday, “Just know that we have looked at a broad range of scenarios and have an approach that is going to continue to stand up for Canadian jobs.”

Round six of NAFTA re-negotiations wrapped up in Montreal last week, with round seven set for Mexico February 26th.