One of the last people to survive the Halifax Explosion has died at the age of 106. 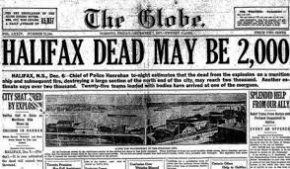 An obituary for Gladys Hazel Forrest says she was born in Halifax on May 31, 1911.

Six years later on December 6, 1917, the then six-year-old Forrest was staying in her aunt’s apartment in the city’s north end when The Norwegian vessel SS Imo collided with SS Mont-Blanc, a French cargo ship laden with high explosives,and exploded in the Halifax harbour.

Years later, Forrest said the powerful blast tore off the side of the house and sent her jumping from the top floor down into her uncle’s arms.