U.S. President Donald Trump has called for a quick completion of the NAFTA negotiations during a phone call with Prime Minister Justin Trudeau.

Trudeau is said to have called Trump on Monday during a tour of aluminum facilities in Quebec, and also took part in American television interviews to promote the integrated Canada-U.S. economy. The prime minister spoke about the level of what he calls complex integration between our two countries on steel and aluminum. 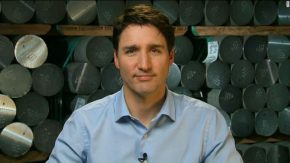 “You have a steel surplus with us, even though we sell a lot of steel to you anyway,” Trudeau told CNN’s Anderson Cooper, “There is a tremendous level of benefit. And on the national security side, we have always been incredibly integrated. Our Canadian aluminum is in your fighter jets. Canadian steel is in your tanks.”

Trudeau also credited the U.S. president for keeping a promise he made at last year’s G7 summit that Canada would get an exemption on steel and aluminum tariffs.
The prime minister is also brushing off the idea that Canada might be bullied into a new NAFTA deal, saying tariffs and the NAFTA talks are two separate issues.

Trudeau meets Tuesday with workers at Stelco and will take a tour of the Dofasco plant during a visit to Hamilton.