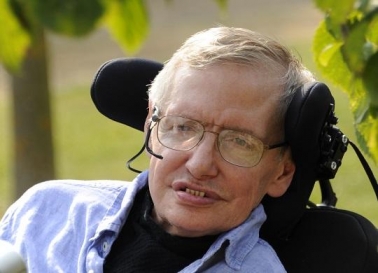 He was described as the greatest scientist since Albert Einstein.

Stephen Hawking has died peacefully at his Cambridge, England home at the age of 76.

Hawking was the best-known theoretical physicist of his time.

His body was attacked by ALS when he was 21, but Hawking went on to live with the usually fatal illness for 55 years while using a computer to communicate his thoughts.

In a 2010 interview with ABC’s Diane Sawyer, Hawking explained why he did not believe in God or religion.

“When you look at the vast size of the universe, and how insignificant and accidental human life is in it, that seems most implausible,” Hawking explained.

Hawking became a scientific celebrity through his theories on black holes and the nature of time. His early life was chronicled in the 2014 film The Theory of Everything, with Eddie Redmayne winning the best actor Oscar.

Stephen Hawking had a Canadian connection. In 2008, he elevated Canada’s profile in the physics community when he accepted a research post at the prestigious Perimeter Institute for Theoretical Physics in Waterloo. He visited the facility in the summer of 2010 and again in 2012.

In a video conference prior to his visit, Hawking said the institute’s chosen focus on quantum theory and space-time was close to his heart.