Canadian-born actor and comedian Jim Carrey is being criticized on social media for a portrait he painted.

56 year old Carrey tweeted a painting believed to be of White House Press Secretary Sarah Huckabee Sanders on Saturday with the caption; “This is the portrait of a so-called Christian whose only purpose in life is to lie for the wicked. Monstrous!” 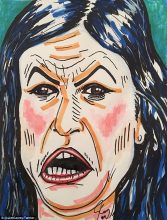 Huckabee Sanders is depicted as a angry-looking woman complete with a ruddy complexion and furrowed brow.

The actor didn’t mention her specifically by name in his tweet.

Some Twitter users are complaining the portrait is unflattering while others are criticizing Carrey’s use of the term “Christian.”