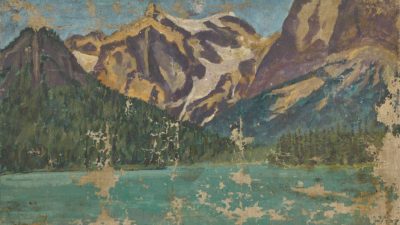 A painting of Emerald Lake in the Rocky Mountains by Winston Churchill – has sold at auction for much more than expected.

The heavily damaged painting was initially listed by Sotheby’s of London at an estimated $15,000 Canadian – but it went for just over $87,000.

Churchill painted the work during a visit to the area in 1929.

Owner  Bill Murray of Devon, England says the painting was a gift from Churchill to Murray’s father, Sergeant Edmund Murray – who was his bodyguard from 1950 to 1965.

There’s no official word on who bought the painting or where it will ultimately end up – but Murray suggests the buyer is from Canada.

The painting was originally mislabeled as Lake Louise – but Calgary historian David Finch saw a photo of it – and put the word out that it was Emerald Lake.

Churchill painted for years – to cope with depression.