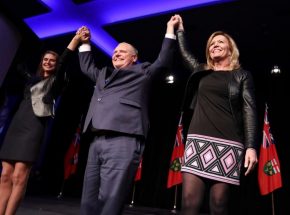 Ford took aim at the Kathleen Wynne Liberal’s for much of his speech. The newly declared winner of the Progressive Conservative party was also joined by his former rivals Christine Elliott, Caroline Mulroney and Tanya Granic Allen, although none of them spoke to the gathering.

Ford has so far promised to lower hospital wait times, cut hydro rates further, scrap the sex education curriculum and find $6-billion in government efficiencies while promising that no one will be laid off. He’s also mused about privatizing recreational marijuana sales in a free market and requiring girls under 16 to get parental permission for abortions.

Meantime, in an interview with City News, Ford spoke about the similarities between his philosophies and those of U.S. President Donald Trump.

“The establishment don’t see eye to eye with the Fords and that’s there choice, along with the career politicians,” Ford explained, “Donald Trump’s a business man. He’s a very successful businessman. I think he’s a marketing change. They need a change down in the U.S.”

Ford also said he has unwavering support for Donald Trump.