Are you a Loblaws shopper? Maybe you’re not anymore.

According to the results of a new survey out of Dalhousie University, public trust in Loblaws has dropped ten percent in three months since the bread price-fixing sandal went public in November.

The only other grocery retailer included in the survey is Sobeys, which actually gained public trust, registering a 1.5 percent increase.

Representatives of Loblaw Cos. Ltd. have insisted the 14 year bread pricing scheme was industry wide, but the president and CEO of Sobeys’ parent company has said that Sobeys was not involved. 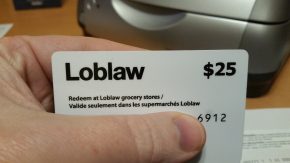 Loblaw has offered customers who were affected by the scheme a $25 gift card. But last week the grocer was criticized after it came to light that some consumers were being asked for copies of their drivers licenses and hydro bills in order to receive the gift card.