We are learning of a breakthrough in the NAFTA negotiations on the automotive dispute that has been a key obstacle to the success of the talks. 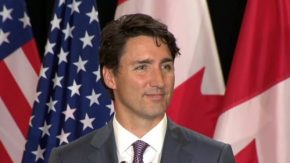 But Prime Minister Justin Trudeau is not discussing the fine points.

“I’m not going to comment on the details of the negotiations around NAFTA, other than to say that we’re consistently standing up for Canada’s interests as well as looking for something that will work for all three countries,” Trudeau explained.

The Prime Minister did not echo the comments of U.S. trade representative Robert Lighthizer, who told U.S. Congress the three countries are “in a pretty good place.”

Light-hizer told US lawmakers that the parties are “finally starting to converge” on NAFTA’s unofficial number-one issue of automotive rules.

But he says several irritants remain, including Canadian policies on dairy, culture, wine and intellectual property.

U.S. negotiators are pushing for a deal within weeks. They’ve indicated if that doesn’t happen, the process risks being moved into next year.