The Juno Awards made a splash last night in Vancouver with an eclectic lineup of rising stars and established favourites paying tribute to Canada’s music scene. 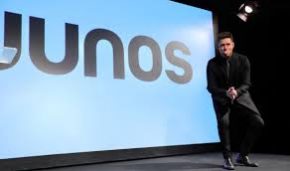 Host Michael Buble oversaw the festivities and announced during the course of the show that he and his wife are expecting another baby.  He warmed up to his hosting duties by picking up an adult contemporary album Juno for “Nobody But Me”

Scarborough’s Barenaked Ladies reunited with former bandmate Steven Page as they were inducted into the Canadian Music Hall of Fame.

Among the Classical artists and albums that took home Juno awards:

“My Name is Amanda Todd” by Jocelyn Morlock was named Classical Composition of the Year.

Classical Album of the year for Large Ensemble was awarded to Jan Lisiecki with NDR Elbphilharmonie Orchestera for “Chopin: Works for Piano & Orchestra.”

Classical Album of the Year: Solo or Chamber was taken by Janina Fialkowska for “Chopin Recital 3.”

Classical Album of the Year: Vocal or Choral went to Barbara Hannigan with the Ludwig Orchestra for “Crazy girl Crazy.”