Ontario Finance Minister Charles Sousa is dismissing suggestions the governing Liberals are pandering for votes with their $158.5-billion budget. 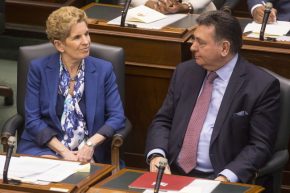 “I understand we’re in a political climate right now because of an election but the decisions we make are beyond election cycles,” Sousa explained.

The plan pumps billions into support for seniors, along with health care, education and child care, but projects the province will run a $6.7-billion deficit in 2018-19 and won’t return to balance for at least six years.

Sousa says the government made a choice to run a deficit in order to provide much-needed support to Ontarians.

The Zoomers advocacy group CARP – A New Vision of Aging – welcomes this senior’s friendly budget, pleased with the announcement of more than $1-billion over three years to what’s called a Seniors’ Healthy Home Program that would provide up to 750-dollars-a-year for every eligible household led by someone 75 and older to offset maintenance costs in retirement.

And there’s more money for home care, that would allow for close to 3-million more hours of personal support and care, nursing visits and caregiver respite hours.

CARP is also pleased with the investment for more long-term care beds but considers it not enough nor soon enough.

“I think it’s actually quite shocking that there’s nothing really on elder abuse and neglect, which we know is a significant issue. In long term care on average, nine incidents of abuse or violence are found. We don’t have anything about that or minimum staffing levels, which is an area of disappointment. And on the whole, older adults in Ontario and their families are very concerned about what to do and where to go on incidents of elder abuse and neglect. We know it’s about one in eight people in Canada will suffer from it, and there’s simply nothing in there,” Tamblyn Watts explained.

There is also a 4.6 percent increase in hospital funding, but Nathalie Mehra of the Ontario Health Coaltion says she’s concerned its just for one year after decades of cuts.

The budget also includes expansion of the Pension Benefit Guarantee Fund from $1000 to $1500 per month, retroactive to May last year to help former Sears Canada employees.