Members of Pride Toronto are asking Toronto Police to withdraw an application which would allow uniformed officers to march in this year’s Pride Parade. They cite the fractured relationship between police and the queer community, which they say cannot be mended through a parade.

Many people connected to Toronto’s gay village are angry over the handling of the case involving accused serial killer Bruce McArthur. The 66 year old Toronto landscaper is charged with first degree murder in the deaths of six men who had connections to the Church and Wellesley area. 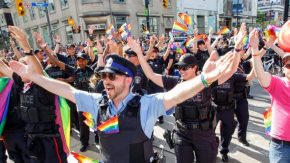 It was just last week, documents obtained by the Toronto Star through a freedom of information request revealed Pride Toronto was at one point open to the idea of allowing officers in uniforms to march in the parade.

There is no official comment from the Toronto Police Service on this new development.