New Ontario poll numbers show the Kathleen Wynne Liberals are in tough for re-election while the Progressive Conservatives continue to attract “economically unhappy” voters who appear to be buying leader Doug Ford’s message that government is the problem.

But it’s not all good news for the Tories. Innovative Research Group says 52 per cent of people asked, agree with the statement, “Doug Ford has a history of poor choices and bad behaviour that make him unsuitable to be premier.” 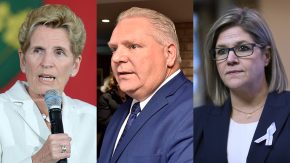 Overall, the PC’s have 37 per cent support, the Liberals have 26 per cent, Andrea Horwath’s New Democrats are at 18 per cent with 10 percent undecided.

Pollster Greg Lyle says a PC victory is not inevitable but the chances of a Liberal win are looking quite slim at this point. Lyle says Ford is tapping into “a sense of anger that governments are acting on behalf of special interests and not in the interest of working people. Greg Lyle joins Zoomer Radio’s Fight Back with Libby Znaimer after Monday’s noon news.