Moranis was one half of the McKenzie brothers with Thomas. 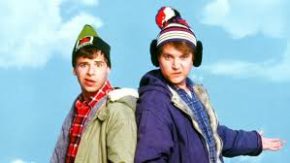 “SCTV” ran from 1976 to 1984 and helped launch the careers of a number of famed international comic legends, including the late John Candy and Harold Ramis.

The event takes place May 13th at the Elgin Theatre. Tickets go on sale through Ticketmaster on Monday at 10 o’clock.

The conversation will be moderated by late night TV show host Jimmy Kimmel and be filmed for an upcoming Netflix project directed by Martin Scorsese.