NAZI LOOTED PAINTING TO BE AUCTIONED IN LONDON 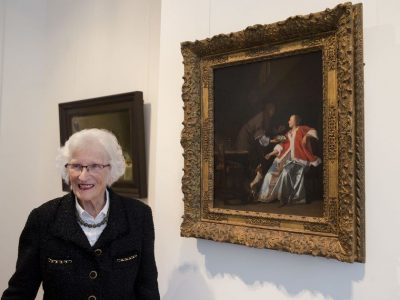 A Dutch Old Master painting looted by the Nazis in the dying days of the second world war is to be auctioned – after it was discovered hanging in the official residence of the Lord Mayor of the City of London – and returned last year to its rightful owners.

The Oyster Meal by Jacob Ochtervelt is on show in the Amsterdam offices of Sotheby’s – and goes on sale July 4th in London – with a pre-sale estimate ranging from $2 to $3.4 million.

Charlotte Bischoff van Heemskerck, the 97-year-old daughter of the doctor who originally owned the painting – says as a child she loved the light blue dress and fur-trimmed red coat worn by the young woman – being offered a plate of oysters by her suitor.