For those planning to run for mayor, city council, or school board trustee in Toronto this fall, today (Tuesday) is the day you can file your papers and officially start campaigning.

The election isn’t until Monday October 22nd. But, until you file a nomination paper, you’re not allowed to raise funds for or spend money on your campaign.

Nominations are open until Friday July 27th at 2pm. 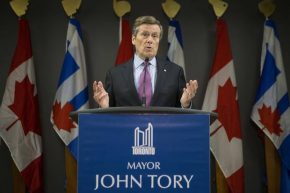 Toronto Mayor John Tory has said on numerous occasions he plans to run for re-election.