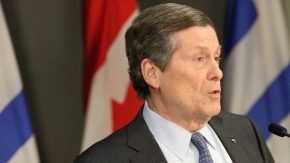 Tory was among the first to file paperwork Tuesday for this fall’s municipal election. So far, there are no high profile candidates who’ve declared an intention to run against him, but as of Tuesday afternoon, five other people had filed paperwork to run for the city’s mayor.

The deadline for registering as a candidate for Toronto mayor, city councillor or school board trustee is July 27th at 2pm with the vote scheduled for October 22nd.