COSBY AND POLANSKI KICKED OUT OF THE ACADEMY

The film academy’s governing body has voted to expel Bill Cosby and Roman Polanski from its membership.

The Academy of Motion Picture Arts and Sciences says its board of governors met Tuesday night – and voted on the pair’s status – in accordance with their recently revised standards of conduct. 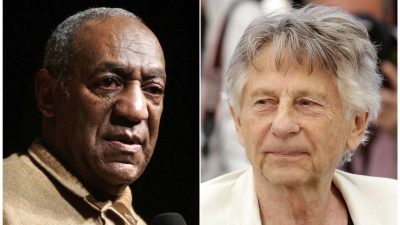 The organization that puts on the Oscars – also expelled Harvey Weinstein from its ranks in October.

Only one person is thought to have been previously expelled from the academy –  Carmine Caridi – a character actor who had his membership revoked in 2004 – for lending out DVD screeners of films in contention for Oscars – which ended up online.

Polanski won a best director Oscar for 2002’s The Pianist. He remains a fugitive after fleeing the United States in 1978 after pleading guilty to unlawful sex with a minor.

Cosby was convicted last week of sexual assault in Pennsylvania.