U.S. President Donald Trump has reversed his earlier statements, admitting he reimbursed his lawyer Michael Cohen for a payment made to adult film actress Stormy Daniels. 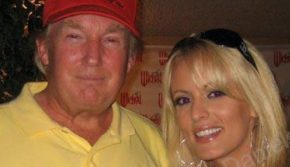 But Trump insisted on Thursday his reimbursement had nothing to do with his election campaign.

Trump’s White House aides were apparently blindsided when on Wednesday night Trump’s new lawyer, former New York Mayor Rudy Giuliani, revealed that Trump repaid Michael Cohen $130,000 to keep her quiet before the 2016 presidential election about her allegations of an affair with Trump.

Speaking on Air Force One several weeks ago, Trump told reporters he did not know about the payment or where the money came from.

Daniels is seeking to be released from a non disclosure deal she signed in the days before the 2016 election to keep her from talking about a 2006 sexual encounter she says she had with Donald Trump.