Questions are being raised over a tactic being used by Doug Ford’s campaign where the P.C. Leader by-passes the regular news media and produces it’s own slick and realistic feeling, imitation news reports. 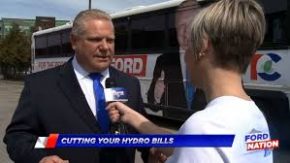 The material is being produced for something called “Ford Nation Live TV” by a former journalist, who was Ford’s press secretary during his run for the PC leadership.

The reports are distributed through social media and one video, about the Tory plan for hydro rates, has been viewed almost 400,000 times.

N.D.P. campaign director Michael Balagus doesn’t think the strategy will have much impact beyond Ford’s base.
Political analyst Jim Warren says “preaching to the Tory converted” actually makes a lot of sense in that it helps control the message and lessens the odds Ford will publicly mess up and lose the election.