Horwath tried to separate herself from Ford and Liberal Premier Kathleen Wynne as the “better choice” as she explained after the debate.

“While Mr. Ford and Ms. Wynne fought about who’s going to make the worst premier of Ontario, I think this election is our opportunity to do something completely different. We don’t have to choose between bad and worse, we can actually have change for the better in our province,” Horwath said to reporters. 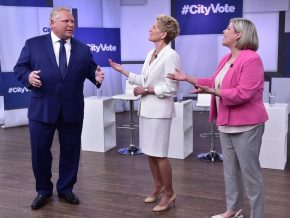 At times during the debate, it was challenging for Horwath to get in her opinion as Ford and Wynne went after each other’s policies including this exchange on the $6-million annual compensation for Hydro One CEO Mayo Schmidt.

“We have said very clearly to the Hydro One board that we do not support that compensation package,” Wynne defended. But Ford fired back, “After you got your hands caught in the cookie jar. I caught ’em, you didn’t even want to divulge his wage.”

Ford was also attacked by his rivals over his refusal to explain how he would pay for his promises while cutting 4 percent of the provincial budget, while Ford targeted Premier Wynne and her record.

The new Mainstreet Poll also reveals intentions of voters of an election were held today. Thirty-seven percent would support Ford and the PCs, 31 percent would vote for Wynne and the Liberals and 23 percent would cast a ballot of Andrea Horwath and the New Democrats.

Election day is four weeks from Thursday on June 7th.