ONCE AGAIN, RAPTORS GONE IN FOUR

Toronto Raptors fans are going through basketball with drawl today after their team was eliminated from the NBA playoffs in Cleveland last night. 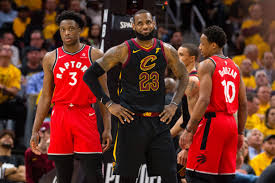 All star DeMar DeRozan was tossed from the game for a flagrant foul in the third quarter of Toronto’s 128-93 loss and after the game suggested the Cavs just have the Raptors number.