ANOTHER AWARD FOR TANYA TALAGA

Add another major literary prize to the list for Tanya Talaga’s “Seven Fallen Feathers; Racism, Death, and Hard Truths in a Northern City.” 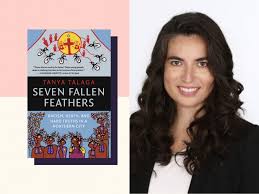 The book was won the $25,000 Shaughnessy Cohen Prize for Political Writing.

The book traces the lives and deaths of seven Indigenous high school students in the Thunder Bay area. The jury called it “a crucial document of our times and vital to the emergence of a true vision of justice in Canada.”

Earlier this year, “Severn Fallen Feathers” won the RBC Taylor Prize and was a finalist for the Hilary Weston Writers’ Trust Prize for Nonfiction and the BC National Award for Canadian Nonfiction.